‘Andre Russell now is our Chris Gayle, our Brian Lara’ 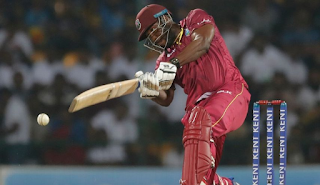 Andre Russell is one of the most valuable players in T20 cricket, and now his West Indies team-mate Dwayne Bravo has likened the Jamaican to “our Chris Gayle, our Brian Lara” in T20Is. Bravo’s praise came in the wake of Russell’s impactful return during the two-match T20I series in Sri Lanka, which was also the first series he played for West Indies since being ruled out of the 2019 World Cup due to an injury.
West Indies won the series 2-0 with Russell playing a big hand, scoring 35 off 14 balls in the first T20I and 40 off 14 in the second. The latter was, in particular, a whirlwind knock as Russell packed six sixes to add to the four he hit in the first match, enough to fetch the Player-of-the-Series award.

“He’s the best in the world,” Bravo, who was part of the West Indies side, said in praise of Russell in a chat with Trinidad-based radio station I955 FM on Friday. “It’s the same I used to say of Chris Gayle when Chris Gayle was in his prime – we are happy to have him representing us, we didn’t have to come up and bowl against him in an international match. It’s the same with Andre Russell. Andre Russell now is our Chris Gayle, is our Brian Lara, in the T20 format. He is the superstar.”