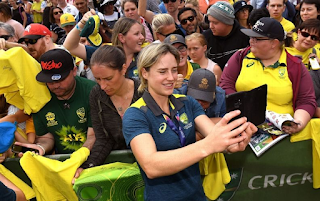 “We just need to make sure we’ve got soul in this group.” It was Ellyse Perry who delivered this critical message to the Australia Women’s team when they stood on the brink of elimination from the T20 World Cup they would go on gloriously to win, the national team coach, Matthew Mott, has revealed.

Australia’s campaign culminated in a wondrous night at the MCG where Meg Lanning‘s team defeated India to raise the trophy in front of more than 86,000 spectators. Mott described how, as well prepared as they were beforehand, the Australians struggled mightily with the weight of expectation.

It had them“Traditionally what happens in cricket, and this is only in my experiences, but because you share so much information about bowling and batting is more of an individual pursuit, we rarely have actual batting meetings, they’re normally part of the full meeting,” Mott said. “But we actually called a batting meeting, we just opened it up and said ‘how do you think we’re going, what do we need to do to actually be the best we can be, and be true to ourselves’ and the honesty around that was incredible.

“Players admitted ‘I’m nervous, I haven’t been playing like I normally play, I should be doing this, I should be doing that’. Ellyse Perry was at that meeting because she goes in both meetings as an allrounder. She says ‘to be honest, we just need to make sure we’ve got soul in this group, and we look out for each other, be a little bit more overt with our body language and maybe the odd fist-bump and something like that when someone has hit a good boundary’. I think if you look back to us in the first two games compared to the last few, you definitely saw a greater appreciation of a partnership, and I reckon that was pivotal.”

nervous and getting away from their natural, aggressive instincts in the tournament opener against India at the Sydney Showgrounds, and took them near to elimination in the following game against Sri Lanka in Perth. After Lanning and vice-captain Rachael Haynes had fashioned a partnership to get them home, team leaders called a batting meeting at their hotel to discuss how to change things – at this point, they needed to win four matches in a row to claim the title. 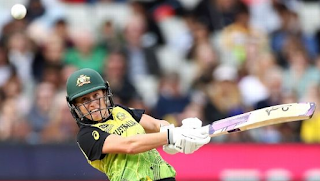 Perry’s message, combined with the batting of Lanning and Haynes, gave the Australians the reset they desperately needed to play more freely, as demonstrated by subsequent wins over Bangladesh, New Zealand, South Africa amid Sydney’s showers, and finally India in the tournament decider. Perry, of course, was to miss the last two games with a hamstring injury, but her experience and wisdom were tellingly kept on board right up to the finish line.”We talked about it a lot before the tournament,” Mott said. “The beauty of this team was we actually realised that we didn’t react well in the first game and we were nervous, I was nervous, so I can imagine what the players were like. There was so much expectation and build-up, and we knew there was a lot at stake. For us to turn out at the MCG was potentially a game-changing moment for not just cricket but women’s sport. So there was absolutely a burden there.

“How we internalised that and actually helped each other out sort of happened after Perth and that partnership between Rach [Haynes] and Meg [Lanning]. I think you always look back and say what a great final, but we had no right to be there unless that partnership happened, and that just changed our whole philosophy for the tournament. It was almost like a lightbulb moment of ‘if we keep playing scared and timid we’re going to get these results’. So I was really pleased with the batting group in particular that they galvanised and formed a unit and said ‘we’re going to commit to this. If it doesn’t come off, it doesn’t come off, but we’re going to make sure we go down swinging at least’.”

Mott, who began his coaching career as an assistant to Trevor Bayliss with the New South Wales state team, also spoke about the parallels between Australia’s women taking on the task of winning a home World Cup and England’s men’s team trying to win their first-ever global tournament, also on home soil in 2019.

“Even the way England, after their disappointment in 2015, tried to change the game up and take the game on,” Mott said. “It didn’t always come off, sometimes it doesn’t look great, and you’re always judged on your results. There are certain times where it doesn’t come off, but if you stay true to it, I think Alyssa Healy‘s the perfect example of that, if you’ve got that rare talent that not many players have, [it does reward you].

How Much Money the ‘Jersey Shore’ Cast Made: Paychecks Revealed