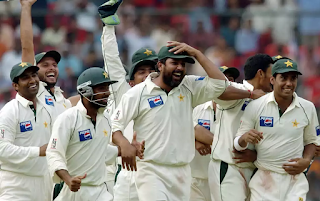 On a scale of life’s realities that range from underplaying to stretching the truth, India-Pakistan is brutally amplified exaggeration. Everyone has an opinion and each one of that everyone wants it to be heard. From heads of states to wannabe heads of states; from NGOs to the UN; from right-wing extremists to wannabe right-wing extremists; from television experts to television experts turned Youtubers; from poster worshippers to TV smashers, you can’t not have colour in your buildup.

Alas, that’s where the colour ends, for when the action slips into the whites, it’s more often than not either dull, or anticlimactic, or one-sided, and simply disappointing.

This was a time when the FTP between these two teams was being honoured, and they were playing each other a little too frequently. It was the return tour, the one where the ‘friendship of 2004’ was being reciprocated with hospitality.

Pakistan, still under the hangover of the humiliation of conceding the series to India at home without any real fight, were 0-1 down in a three-Test series, a scoreline that could just as easily have been 0-2 had it not been for an utterly un-Pakistan rearguard at Mohali. Chinnaswamy gave them the hope to equalise. In fact, from 1995 to 2010, Chinnaswamy gave every visitor more than just hope. It was the perfect host, where the home side just wouldn’t win.

Anil Kumble had been a thorn in this Pakistan side. It’s not that their batting came with a reputation for being sensible, but Kumble had thus far made a bunny out of the one guy who tried to be – Inzamam-ul-Haq – dismissing him seven times in as many matches. “He has got more than 450 wickets, and not all of them have come against us,” Inzamam tried to justify after losing the second Test in Kolkata.

“I am confident we can draw level at Bangalore. All our batsmen are in form, we just need to be stronger in the mind and need a combined effort.”

Meanwhile, the curator in-charge had taken it upon himself to put the city’s road contractors to shame, churning out a sleeping beauty of a track with the potential to last an entire season. He’d clearly gone down the overt defensive route; maybe the Indian think-tank had gone down this route too. They’d rather keep the 1-0, secure the series, secure their jobs, secure their homes from the chances of being vandalised.

So Pakistan chose to bat. Inzamam was the superstar, Younis Khan his sidekick, and together, they were just poetry. That’s what Test cricket allows, the survival of the fittest and the fattest in equal measure. Pakistan eventually finished with 570 in just under two days, something that’s usually enough to eliminate one of the three possible results. Just not when Virender Sehwag is in the opposition ranks.

Sehwag in his mood does no poetry, he does a rap, throwing punch after punch while making practically everyone who dares to come midway look like a fool. On day three, while he was whistling around at a strike-rate of nearly 80, the others were prodding, pushing, chipping, doing what you’re meant to do in a Test match.

The punches then sting a lot more during the pressers when he comes up with, “I found no-one difficult today”. Which made one wonder who would take more offence – the Pakistani bowlers or his fellow batters. Seam, pace, bounce, spin, sledges, he had the same answer for everything en route his double-ton – a smack.

But the rest of the Indian batting collapsed to hand over a significant lead before Shahid Afridi cut loose and Inzamam decided to gamble with the declaration, giving India a sniff with a target of 358 on the final day.

“We will definitely go for a win,” confirmed VVS Laxman at the end of day four while speaking to the press. “The start is very important. The way Sehwag plays, anything is possible.”

Ten minutes into the morning, and with a couple of plays and misses already, Gautam Gambhir decided to poke a little harder at an Abdul Razzaq delivery that was already angling across. It found a crack, deviated some more, and had a loud woody sound as it went past the bat. It could only have been the edge.

A couple of balls later, Sehwag flirted at a Mohammad Sami lifter. Inzamam couldn’t take it any longer. It was Sehwag on this occasion after all, and the Pakistan captain jumped from first slip, charged halfway down the pitch and let out a massive appeal in the umpire’s face, angrily waving his hands as he did so. Lo and behold, he got exactly what you get with such pressure appeals: a one-match ban.

The first hour was seen out without casualty for India’s sake – albeit with a lot of fuss. Then came the twist.

Gambhir tapped one gently into the leg-side, Sehwag aimlessly wandered down the pitch, Razzaq charged in from mid-on with one stump to aim at before swooping in to throw that stump down. Sehwag had once said the calling between him and Gambhir was “aankhon aankhon me” (with eye contact only). Alas, this one could’ve been averted with some use of the mouth.

One expected India to slow down, but they went the entire extreme and just shut up shop. To put things into context, they were going at 3.67 runs per over while Sehwag was around, and 1.91 after he departed. Such is the shell that Sachin Tendulkar and Rahul Dravid went into that they simply refused to put anything away.

“I was upset at that point because I knew that my dismissal meant that we would not win,” Sehwag would go on to write in his newspaper column a couple of days later. “I saw myself as the only batsman who could score at four-an-over since the rest of our batsmen are more correct and conventional Test cricketers. In my mind I felt that the rest would be able to draw the game but I was the only one capable of winning it.”

Wide half-volleys, drag downs, full tosses, looped up stuff – they left everything, and when they bothered to use their bat, they blocked.

“The moment they lost Sehwag, they went on the defensive and that surprised me. That helped us set attacking fields. I did not have to worry about giving away runs and could concentrate on wickets,” Inzamam said at the end of the match.

63 balls was all Dravid could middle his defence for, before the 64th was a slight explosion off a good length from offie Arshad Khan, taking the glove for Younis at silly point to go one-handed. Laxman didn’t last long either, and in between, as if to prove how desperately they’d gone into a blockathon, played out a period of 52 balls with Tendulkar in which not a single run was scored.

Sourav Ganguly, on the back of a horrible run of scores through the series, came to the middle to join Tendulkar with approximately 45 overs left to be played out. It was the last known batting pair.

A section of the crowd began shouting, “We want Karthik, we want Karthik” as Ganguly walked out. A few of them even had a congratulatory poster ready for when he touched double digits. Ganguly didn’t let them have the joy of using it, scratching around for a while before going for an expansive drive to a googly that he just hadn’t read.

“I didn’t know what happened. I hadn’t heard the ball hitting the stumps and I was waiting for the umpire’s confirmation,” Ganguly said later. Yes, bowled right through the gate. And the Chinnaswamy booed. They could see this coming from a distance.

The equation: 40 overs.Five wickets. A session and a half. Never mind the runs.

More men crowded the bat, seven of them now. Tendulkar kept blocking. Dinesh Karthik dared not do anything else. Just moments before tea, Sami unleashed a fierce short one at Tendulkar who fended it away awkwardly to short leg. It was a regulation catch, but Asim Kamal found a way to juggle it a couple of times and still not hold on.

More blocks. More maidens. More men around the bat. Nearly an hour is seen off.

Afridi kept firing them in, and after every ball that beat Tendulkar, smiled as if looking for acknowledgement. The master was happy to oblige, often nodding in appreciation. Just over an hour remained, and Afridi got one to go straight on. Sachin groped, gloved and Kamal had his redemption. Afridi set off on a celebratory run to square leg. Inzamam had never run faster in his life to hunt someone down, not even that Toronto heckler in the stands.

“Perhaps playing for a draw was not such a good idea since most of our batsmen are cast in the stroke playing mould. Even at tea, the general mood was that we would scratch out a draw. The possibility of defeat dawned on us when Sachin Tendulkar got out. There were still 20 overs left and we knew that the remaining batsmen would not be able to play out time with umbrella fields in operation,” Sehwag continued in his column.

Kumble tried, even putting his more illustrious batsmen to shame with his batting approach, but India were all out 25 minutes short of stumps. Pakistan equalised, clinically.

Unlike the mad slogging of the first innings that triggered the Indian dismissals, these were all attritionally-executed ones under the pressure that was built up, ball by ball. And this was the weakest a Pakistan side had been in a decade, without a bowling spearhead, under a captain one loss away from being sacked, with the wounds of having been blanked 0-3 in Australia still fresh, against a number two-ranked Indian side playing at full strength. They could give themselves some credit.

It is curious then why nobody really talks about this match over some of the other mundane games in the rivalry. Perhaps because the footage is lost somewhere in the change of broadcasters; perhaps because Chennai 1999 was still very close for comparisons; perhaps because a standing ovation given to the opposition makes for better storytelling over the Indian captain being jeered by his own crowd.

“We had decided to play normal cricket and weren’t thinking about the target. After lunch we got a bit defensive and lost a few wickets as a result. It wasn’t a conscious effort to get defensive but it cost us the game,” Ganguly said at the end of it.

More boos. That’s the animal spirit an India-Pakistan game brings out even in the most civilised of places. So what if Pakistan played better, you’re just not allowed to lose. See – brutally amplified exaggeration of life’s realities. But it better be nothing else.

$5 Million Stolen by Hackers from Osmosis in a LP Exploit