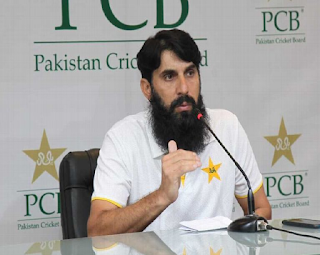 akistan head coach Misbah-ul-Haq has called for a “fair and equal” resolution to the World Test Championship when cricket finally resumes even if it means extending the tournament, warning that a shortened competition would fail to give a “true picture” of the standings.

With cricket, like nearly all major sports and activities, forced to a grinding halt because of the coronavirus pandemic, one of the key questions is how to bring the inaugural World Test Championship, which is scheduled to run until June 2021, to an agreeable conclusion.

Several series that are part of the Championship have been postponed over the past few weeks, with the scheduling and limited time-frame meaning it is virtually impossible to fulfil all the fixtures before the end date.

“When we finally start moving back to normal life and cricket can resume, every side should get equal opportunities and the tournament shouldn’t be shortened,” Misbah said in a video press conference.

“No matches should be struck off, even if that means prolonging the Championship. Every side should get the chance to play all the games they had scheduled in this cycle.

Otherwise, you won’t get the true picture of what the rankings should have actually been and only some teams play all their games. That will disrupt the balance of the tournament. To me, it doesn’t matter if this goes beyond 2021 if that’s what it will take for everyone to get equal opportunities. That’s not a problem.”

England’s three-match Test series in Sri Lanka and the second Test of Bangladesh’s series in Pakistan are among the most notable World Test Championship fixtures to be postponed, but it remains exceedingly likely most, if not all, cricket over the next few months won’t go ahead.

The seasonal demands of Test cricket mean rescheduling these games before June 2021 is improbable, and if all games in the Championship are to be honoured, extending the tournament would appear to be the only solution. That would mean delaying the start of the second World Test Championship competition, due to start immediately after.

Misbah also spoke about the challenges players faced trying to keep themselves fit while ensuring they stayed home, revealing the coaching staff were monitoring their progress through fitness watches.

“All of our centrally contracted players and those in our wider pool are in complete contact with the coaching staff and the fitness trainer. We send them the training plans that we want them to follow and to keep ourselves in shape to the best of our abilities. We want to ensure when cricket resumes, the physical conditions of our players should be the same as it was before and meets the demands of international cricket.

“We have groups online where we check in with players on how they think they’re doing. We share plans with them on the exercise regimen to follow even if they don’t have access to gym facilities-

“Because we can’t practice on the ground, what we can do is make sure we do our homework properly. That goes both for me and the players. We look at the last couple of series we played there and how England played in the last season at home. We analyse what we can do better so as soon we get the opportunity, we hit the ground running.

He did have a few choice words for Sharjeel Khan, acknowledging he had the ability to be an explosive asset in T20 cricket, but expressed disappointment with his fitness levels.

“He has the strike rate you’ll need at the top of the order at the World T20, especially against pace bowling on Australian pitches. But I think Sharjeel needs to work harder. He’s emerged back onto the scene after such a long time, so the one thing he could have ensured was his fitness, the one thing he could control, was up to the mark.

If you’re serious about making a comeback, the you should have been in perfect physical shape. If he thinks he can come into the side without having made any changes, then selecting him would be an injustice to the other players. I wasn’t satisfied to see that at all. Now that there’s no cricket, he should be thinking day and night he needs to become super fit—–