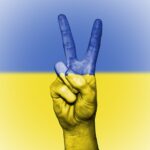 When it was donated in March before the latest crash, the NFT was almost three times its current value. Today, the government of Ukraine announced that its Assistance for Ukraine crypto fundraising campaign raised more than $100,000 and sold a donated Cyberpunk NFT. This will be used to fund its war against Russia.

In March, Cryptopunk #5364 went to the Ukrainian crypto fund. Yesterday, the NFT was sold by the fund to an unknown buyer for 90 Ethereum. NFTs, which are tokens based on blockchain technology, allow users to show ownership of digital or physical assets.

Ukraine started accepting NFT and crypto donations in February, just after Russian troops invaded. The nation has raised more than $135 million through crypto donations and the sale of donated NFTs.

A crypto group raised $6.75million through the sale of one NFT of the Ukrainian flag in March. The Ukrainian rap group Kalush Orchestra was this year’s Eurovision champs and auctioned their trophy from the music competition in order to raise nearly $1 million in Ethereum for the fund.

The crypto fund is used to purchase non-lethal supplies for Ukraine’s military. These supplies include bulletproof vests and medical supplies . The Ukrainian government does not hold or spend the funds. It only endorses the project and supervises its use. The fund’s Treasury is managed by the Ukrainian crypto exchange Kuna, which helps to fund the purchase of volunteers.

The case study of Ukraine’s embrace of crypto during wartime has shown the potential benefits of using crypto in geopolitical conflict areas where fiat currency (such U.S. Dollars) can be slow to move.

NFT and crypto donations are also fully exposed to the crypto bear market. The Ethereum price has dropped almost 70% over the past ten weeks, which is inexorably affecting the fundraising potential for NFT collections such as Cryptopunks, which are built on Ethereum.

Yesterday’s sale of Cryptopunk generated just over $100,000 in wartime funding for Ukraine. The same amount of ETH that was sold yesterday would have been worth more than $267,000 the day that the NFT was given in March.

The post One CryptoPunk was sold at over the odds to raise $100k for Ukraine War first appeared on The Daily Encrypt.

How Much Money the ‘BiP’ Host Makes