the dawn of a new era — Petersen Automotive Museum 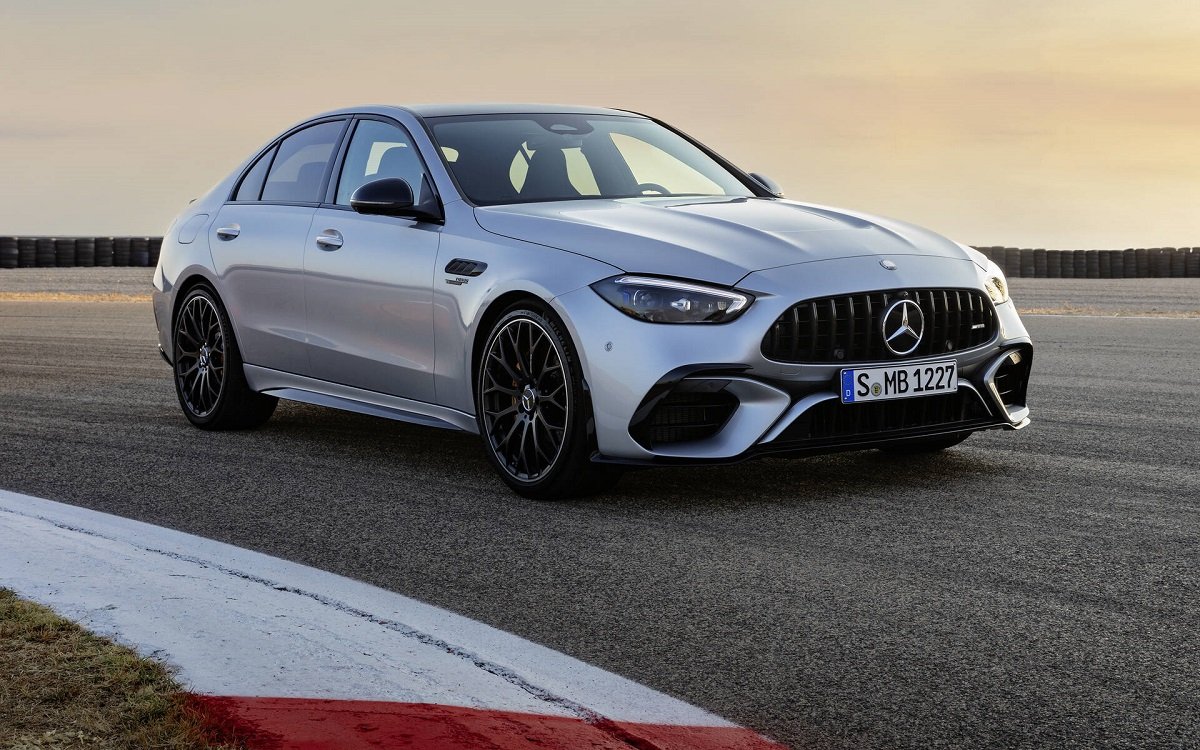 The AMG-specific E PERFORMANCE hybrid drive: combustion engine in the front, electric motor in the rear

The 201 hp (150 kW) electric motor is positioned at the rear axle, where it is integrated with an electrically- shifted two-speed gearbox and the electronically controlled limited-slip rear differential in a compact electric drive unit (EDU). Experts refer to this layout as a P3 hybrid. The lightweight high-performance battery is also located in the rear above the rear axle.

This compact design has numerous advantages:

Inspired by Formula 1, developed in Affalterbach: the AMG high-performance battery

When the electrification strategy was being defined, it was clear from the outset that all essential components would be developed in Affalterbach. At the heart of this is the AMG high-performance battery (HPB). The development of the lithium-ion energy storage system is inspired by technologies that have already been proven in the Mercedes-AMG Petronas F1 Team’s Formula 1 hybrid racing cars. The AMG high- performance battery combines high power that can be utilized frequently in succession with low weight to increase the overall performance of the vehicle. Added to this are the fast energy draw and high power density.

The high-performance battery offers a capacity of 6.1 kWh, a continuous output of 94 hp and a peak output of 201 hp for ten seconds. The low weight of only 196 lbs (89 kg) helps to deliver the very high power density. Charging takes place via the installed 14V on-board charger with alternating current at a charging station, wallbox or household outlet. The battery is designed for fast power delivery and draw rather than longest possible range.

The continual push for innovation: direct cooling of the battery cells

Every battery needs a defined temperature for optimum power delivery. The basis for the high performance AMG 400-volt battery is its innovative direct cooling system: a high-tech coolant flows around all 560 cells and cools them individually. The result is the battery is always in a consistent, optimal, operating temperature window, no matter how often it is charged or discharged. Should the average temperature be exceeded when driving at high speeds, protection mechanisms are configured so that maximum performance can be obtained from the battery, with the temperature level subsequently lowered by direct cooling.

The basic operating strategy is derived from the hybrid powerpack of the Mercedes-AMG Petronas Formula 1™ racecar. As in the premier class of motorsport, maximum power is always available when the driver accelerates aggressively – for example, to accelerate powerfully out of corners or when overtaking. The electric power can always be accessed and frequently reproduced via high recuperation performance and needs-based recharging.

The eight AMG DYNAMIC SELECT drive programs “Electric,” “Comfort,” “Battery Hold,” “Sport,” “Sport+,” “RACE,” “Slippery” and “Individual” are precisely tailored to the new drive technology and offer a wide range of driving experiences – from efficient to dynamic. The drive programs adjust important parameters such as response of the drive system and transmission, steering characteristics, suspension damping and sound. The boost power of the electric motor also depends on the selected drive program. The peak output of the electric motor, providing a boost of up to 201 hp, can be called up at any time via the kick-down function.

When driving on all-electric power, the Acoustic Vehicle Alerting System informs others that the AMG C 63 S E Performance hybrid is approaching. A specially composed, low-frequency and speed-modulated AMG sound is emitted to the outside via a loudspeaker at the front and a soundbar with two loudspeakers at the rear.

In addition, the AMG developers also use the external speakers for a more advanced sound experience. For this purpose, they pick up the real sound of the combustion engine via a pressure sensor in the exhaust system and enrich it further before it’s emitted in the interior via the entertainment sound system, thus making it possible to experience the signature AMG sound. In addition, the sound is modulated via the existing external loudspeakers.

Because the high-performance battery is always in the optimum temperature window of around 113 degrees Fahrenheit due to direct cooling, recuperation can also be optimized. Normally, a battery heats up strongly at a high recuperation rate so the energy recovery level needs to be limited. Recuperation starts when the driver takes their foot off the accelerator pedal. The driver can select four different levels of recuperation using the right-hand AMG steering wheel button, with the energy recovery being designed differently according to the driving mode.

The Handcrafted AMG 2.0-liter four-cylinder engine was developed entirely at the company’s headquarters in Affalterbach and is manufactured according to the “One Man, One Engine” principle. In doing so, Mercedes- AMG combines the craftsmanship of its highly qualified employees with the modern production methods of “Industry 4.0” and a high degree of digitization.

The hand-built engine, with the internal designation M139l, is the world’s first production engine with an electric exhaust gas turbocharger. This innovative system is derived directly from the technology that the Mercedes-AMG Petronas F1 Team has been using so successfully in the premier class of motorsport for many years. The new form of turbocharging guarantees particularly spontaneous response across the entire rev range. This leads to an even more dynamic driving experience, while at the same time increasing efficiency.

Compared to the AMG C 43 Sedan, the turbocharger in the C 63 S is significantly larger enabling a higher airflow rate and thus more power. In addition, the integrated electric motor is powered by the 400-volt high- voltage system (48 volts in the C 43 Sedan).

In the C 63 S, the four-cylinder unit produces 469 hp at 6,750 rpm. This makes it the most powerful series- produced four-cylinder in the world. The maximum torque of 402 lb-ft is available at 5,000 – 5,500 rpm. A belt-driven starter-alternator (RSG) combines the alternator and starter in one component and is integrated into the 400-volt high-voltage system. The RSG starts the combustion engine and ensures the basic supply of the ancillary components such as air conditioning or driving lights.

Power is transmitted via the AMG SPEEDSHIFT® MCT 9G transmission (Multi-Clutch Transmission), in which a wet start-off clutch replaces the torque converter. It reduces weight and, thanks to its lower inertia, optimizes response to accelerator pedal input, especially during sprints and load changes.

The standard AMG RIDE CONTROL steel sprung suspension with Adaptive Damping System combines sporty driving dynamics with a high level of long-distance comfort. The basis for this is provided by the front axle with specially developed steering knuckles and supporting joints for the spring link, as well as by the rear axle, which also features elastokinematics designed for dynamic handling. Based on this, the damping at each individual wheel is continuously adjusted to the current demand – always taking into account the preselected suspension level, the driving style and the condition of the road surface. In addition to an improvement in ride quality and comfort, this leads, above all, to an increase in driving safety. There is a choice of three different damping maps (“Comfort,” “Sport” and “Sport+”).

The standard rear axle steering operates with a maximum steering angle of 2.5 degrees. At speeds of up to 62 mph the rear wheels turn in the opposite direction to the front wheels (variable depending on the AMG DYNAMICS setting). This leads to a virtual shortening of the wheelbase, which in turn results in significantly more agile turn-in, less steering effort and improved maneuverability. At speeds above 62 mph (variable depending on the AMG DYNAMICS setting), the rear wheels turn in parallel to the front wheels – up to a maximum of 0.7 degrees. This virtual extension of the wheelbase has a positive effect on driving stability, leads to a faster build-up of lateral force when changing direction and thus to a more direct reaction of the vehicle to steering commands.

In keeping with the extreme output figures and the associated performance, the AMG high-performance iron rotor composite brake system with an aluminum hat and 6-piston fixed calipers at the front and 1-piston floating calipers at the rear is fitted as standard. The brake system impresses with short braking distances as well as maximum stability and fade-resistance under heavy use.

Unfiltered Photos of the Actress