This Day in Automotive History 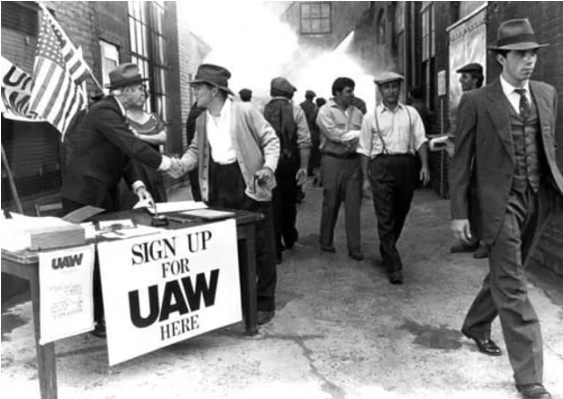 On this day in Automotive History, August 26, 1935, the American Federation of Labor (AFL) officially chartered the United Auto Workers (UAW) in Detroit, Michigan. Throughout the mid 20th century, as factory production expanded, auto workers faced increasingly dangerous, even fatal working conditions. With the passage of the National Labor Relations Act (or Wagner Act) in 1935, private sector employees were guaranteed the right to organize into trade unions, engage in collective bargaining, and take collective action such as strikes. The UAW was founded in May 1935 in Detroit, Michigan during the height of the depression when jobs were scarce and mass layoffs were commonplace. The UAW thus rapidly found success organizing sit-down strikes across the country. The most famous of which was at the Flint, Michigan Fisher Body Plant in 1936. The strike lasted over 44 days and ended in February 1937 after Michigan’s governor, Frank Murphy, negotiated recognition of the UAW by General Motors. Further victories, including another successful sit-down strike in a major Chrysler plant, lead to a boom in UAW membership which swelled to 150,000 by mid-1937. Inspired by their organizing success, the UAW targeted one of the largest “Big Three” Michigan-based automakers in the country: the Ford Motor Company. Ford had long resisted unionization and was notorious for their counter unionizing strategies. Ford manager Harry Bennett went as far as to establish an internal security service called the Ford Service Department who often engaged in violent intimidation tactics and espionage within the plants. On May 26, 1937 six UAW members from Local 174 arrived at Ford Motor Company’s River Rouge Plant to pass out leaflets, when the six posed for a photo, they were approached by members of the Ford Service Department who subsequently beat the union organizers. The violence was well documented by the press and soon, images depicting what was dubbed the “Battle of the Overpass” were published in newspapers across the country. Public support for the Ford Motor Company plummeted in the wake of the attack and a subsequent strike at the plant ultimately forced the Ford Motor Company to recognize UAW in 1941.

Immediately following the Second World War, as the Cold War ignited and the Second Red Scare took hold of the United States, the UAW took an adamant anti-communist stance and sought to root out its communist members. However, despite its hard, anti-communist stance, the UAW became an increasingly progressive voice in American politics throughout the 1930s and into the 60s. Under the leadership of Walter Reuther (one of the six UAW leaders assaulted in the Battle of the Overpass) the UAW supported social welfare programs of the New Deal Coalition, were increasingly involved the Civil Rights Movement including the March on Washington, and strongly supported Lyndon Johnson’s Great Society and War on Poverty initiatives. The UAW would go on to establish unemployment benefits, wage adjustments, pensions, health plans and vacations for auto workers across the nation. However, following the Iran Oil embargo which led to severe layoffs and wage reductions in the auto manufacturing industry, UAW membership began to dip. Although membership reached its peak in 1979 at 1.5 million, by 2006 that number fell to approxolmatley 540,000. That downward trend continued as a result of increased automation and manufacturing outsourcing due to a changing, globalized market. However, despite the significant drop in membership, many have credited the UAW with aiding in the revitalization of the auto industry following the 2008 recession. The UAW continues to represent hundreds of thousands of autoworkers across the country.

Battle of the Overpass