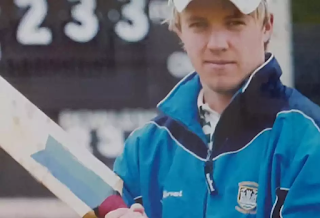 When Bobby Robson replaced the legendary Johan Cruyff as coach of FC Barcelona in 1996 – taking on one of the most intensely pressurised jobs in football – he was told by the club’s president that a team in transition badly needed a striker and was asked whether he knew of one. There was a 19-year-old kid at PSV Eindhoven, replied Robson. Senor Nunez duly took out the Blaugrana chequebook and paid a then world-record fee of 13.2m pounds for Ronaldo Luis Nazario de Lima, while making Robson acutely aware that his job depended on the Brazilian scoring goals. O Fenomeno struck 47 times in 49 games and won FIFA World Player of the Year, which still wasn’t enough to prevent Robson being given a ‘lateral promotion’ to Director of Football as Louis van Gaal replaced him as coach.

A similar, if slightly scaled-down predicament faced the Carrickfergus CC committee in the winter of 2003-04 after the club, founded in 1868 but in a permanent home since only 1988, had earned promotion to the top-flight of Northern Irish cricket for the first time in its history. A pro was needed, an overseas player – not permitted in the lower tiers if they had played first-class cricket – to give the team an edge and allow them to be competitive against the established sides of Ulster cricket. Although it is fair to say the club’s budget didn’t extend to breaking any world records.

Step forward club stalwart Roger Bell, who earlier that summer had been watching Sky Sports when a sprightly young lad in the South African Under-19s team made 143 against his English counterparts at Arundel before being dismissed by Liam Plunkett. Bell floated the player’s name to the committee and, after brief deliberation, they made the appropriate calls.

It was a gamble – dipping into the young-pup Southern Hemisphere market can be perilous – and the club’s short-term future depended on one Abraham Benjamin de Villiers, who was just seven first-class appearances into his career and averaging an unspectacular 33.7, making a few runs. You probably don’t need a spoiler alert at this point before being told that he turned out to be quite useful. A little bit handy. Not the worst. But in the spring of 2004, Carrickfergus were more interested in what he could do for them in the here-and-now, or the there-and-then: namely, not allowing one of the oldest clubs in Ireland to embarrass itself on its maiden top-flight voyage.

De Villiers was due to arrive on the morning of Carrick’s third game of the season, May bank holiday Monday, but after a delay in his flight’s layover in Germany, and another transit through London, there was still no sign of him as Ryan Eagleson prepared to toss with the Belfast Harlequins skipper. Just then, word reached the team that the flight had finally touched down at Belfast International, and so the new pro’s name was hastily inked on to the teamsheet in the hope that he might be able to bat at number five or six.

However, after a peddle-to-the-metal lift from the airport off Bell – and a 54-run opening partnership in 16 overs – AB arrived at the ground, padded up, and strode out at first drop, joining the man in whose house he would lodge for what turned out to be a 12-week stint on the Emerald Isle. Barry Cooper was a New Zealander who first went to Ulster as a replacement overseas player and settled there after landing a job as a quantity surveyor. He had recently bought the house from Roger Bell, “and part of the deal was I had to put up the overseas pro,” he says, deadly serious.

“The first time I met him was literally when he walked out to bat,” continues Cooper. “It was like, ‘OK, hi. How you doing? I’m Barry’. It was a stinker of a wicket, wet, doing a fair bit, and slow going. I said, ‘I know you’ve probably never played on a wicket like this in your life. I know you’re going to want to impress. But you’re just not going to be able to play the shots that you’re used to playing. Let’s just see how we go here.’ He spooned a few up and was nearly caught at mid off in his first few balls. But he adapted.”

De Villiers would end up with a debut 82 from 85 balls, working his way up through those now familiar gears. “Their overseas pro was Ijaz Ahmed Jr, who played a couple of Test matches for Pakistan,” recalls Cooper, who would himself bat through for 87 not out. “He came on with his off-spin and I said to AB: ‘This guy is going to be near impossible to get away. It’s a tough wicket and he’s not going to bowl any bad balls. We’ll nurdle him, and if we can get 20 off his 10 we’ll worry about the rest later’. AB obviously took that as a bit of a challenge and in his first over skipped down the wicket and stuck him back over his head for six. Twice. That was the first time I remember thinking to myself: this boy’s a bit special.”

Despite de Villiers ending up spending just shy of three months in Northern Ireland, his Carrick teammates would only see him bat a further nine times, starting the following Saturday with a visit to North Down and a breezy 44 in an emphatic defeat to the champions of the previous three seasons. The following day’s Ulster Cup first-round match saw a coach trip to Donemana CC in the town of Strabane, nestled right up against the western border with the Republic of Ireland.